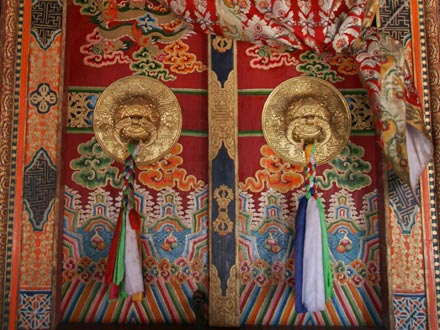 Them is some BIG Tibetan knockers! 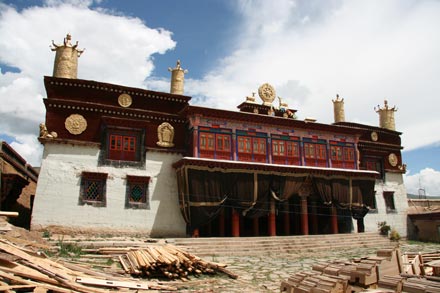 Rural Kham is like one huge Buddhist construction site. Everywhere, the monasteries and nunneries destroyed during the Chinese invasion and the Cultural Revolution are being rebuilt at a furious pace. There are monks and nuns everywhere, and almost all conversations are in Tibetan. In many places, Chinese is virtually useless – I love it.

We had heard that Tibetan culture in Sichuan and Qinghai was much healthier than in the Tibetan Autonomous Region (TAR). I can’t wait to get to the TAR to judge for myself. 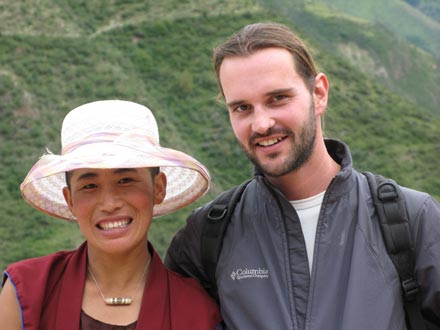 We first met Fredy while staying at Dargye Gompa and immediately declared him a Contemporary Nomad because he has been traveling for such an extended period of time. So who is Fredy, and what is special about him?

Frederik Hensler is a 27-year old nurse from Donaueschingen, Germany. After working for a few years, he initially set off for Southern India, and has now been travelling for 10 months. After the Andaman Islands, Fredy went to Sri Lanka from where he caught a lift by sailboat to the Maldives (wow, I’m envious!). He then made his way to Thailand and took a boat up to Yunnan province in China. But this is not the end. Fredy is working his way down south again to Vietnam, Cambodia, Thailand and Indonesia. Fredy, keep us posted where you are!

By the way, when Fredy left Germany, he had four cans of German sausage with him devouring them as he went. What a brilliant idea – why didn’t I think of that? 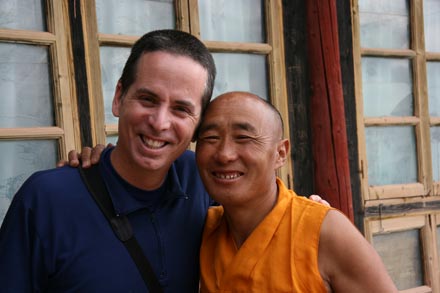 After moving for several days, it was time again to get some rest. Just one hour outside of Ganze was Dargye Gompa, a small monastery surrounded by grasslands, mountains and several glaciers. We decided to relax and enjoy the tranquility of the associated nearby guest house in the home of Gyalten Lobsang Shamba Rinpoche, an incarnate lama of the Gulukpa sect. The guest house was run by three fantastic monks, and as soon as we got there, we knew we would stay for a while. It was love at first sight. END_OF_DOCUMENT_TOKEN_TO_BE_REPLACED

Kham and the Khampa

Map lovers may have already realized that we are traveling through what is traditionally know as the Tibetan province of Kham. During the 20th century as China gradually occupied the Tibetan regions, Kham was broken up and divided between the modern Chinese provinces of Tibet, Yunan, Qinghai, and Sichuan.

The Khampa are well known for being fiercely anti-Chinese and many claim that they fought hardest to oppose Chinese control. Even today, they are quite political and are very outspoken about the Chinese occupation of Tibet and the oppression of Tibetans in the Tibetan Autonomous Region (TAR) as well as in Greater Tibet.

In recent years, there have been several bombings by Khampa resistance and we have seen several examples of Chinese propaganda urging the Khampa to hand over their explosives and respect Chinese control. From what we have heard, that is clearly not going to happen. 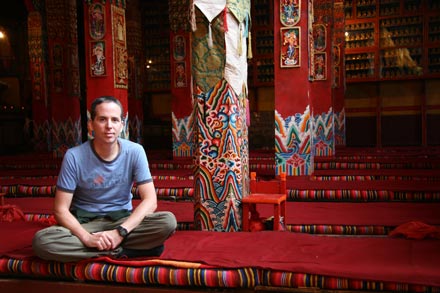 Ganze is baffling – like a Buddhist koan! For the last few weeks, we have been hearing how aweful Ganze is … it’s a cement, Chinese dump… there’s nothing there… the Tibetan culture is dead… just skip it. 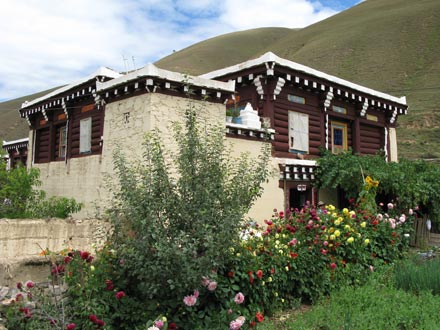 “Why do all the houses look so perfect and beautiful?” Tony and I were wondering while driving along the Sichuan-Tibet Highway from Danba to Ganze in Sichuan province. Freshly painted and surrounded by colorful flowers, these Tibetan homes were unlike the weather-beaten and often dilapidated houses we had seen going through the backcountry. The surprising answer was offered to us by a monk a couple of days later. END_OF_DOCUMENT_TOKEN_TO_BE_REPLACED 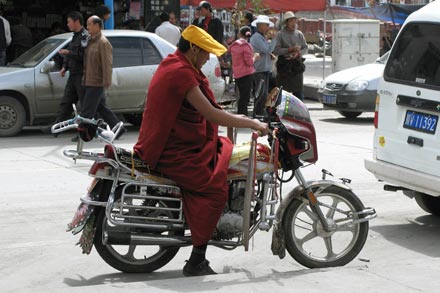 Buddhism has come a long way in the last two thousand years. It seems that the monks aren’t END_OF_DOCUMENT_TOKEN_TO_BE_REPLACED

A Closer Look at the Grasslands 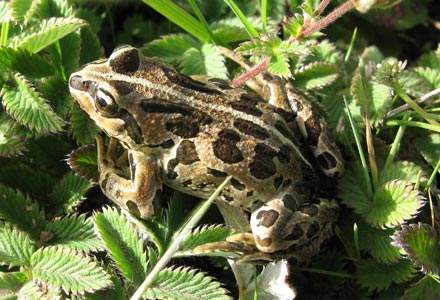 During one of our walks through the grasslands, we discovered this little frog. It was not particularly cooperative but after a considerate chase with my camera, it finally accepted its fate.

One of the big challenges Thomas and I have had maintaining this blog is the extremely high altitudes we are currently traveling through. Many people don’t realize that altitudes over 3,000 meters (10,000 feet) can wreak havoc on any electronic device with a hard drive, including computers, MP3 players, photo storage devices, etc.

The problem is caused by END_OF_DOCUMENT_TOKEN_TO_BE_REPLACED