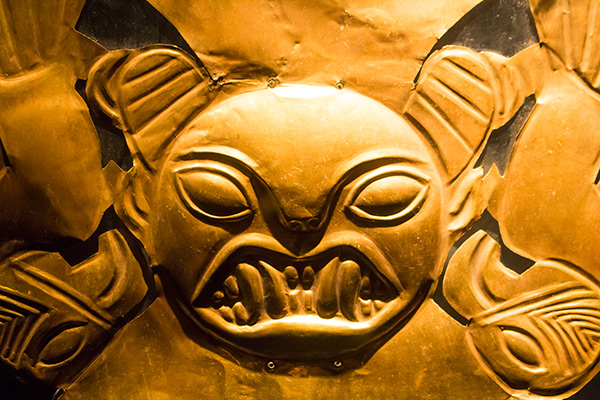 Mochica Headdress in the Museo Larco

Lima is one of those cities which travelers tend to rush through. More than once, we’ve heard tourists count their luck that they only had to spend a few hours here in transit, or were able to bypass the metropolis altogether. So we were quite shocked when we got here and sort of fell in love with this South American capital. Lima has a fun, quirky vibe,  and Limeños are humorous, welcoming and helpful.

Yes, this town definitely has a rough side, and visitors and locals alike hold their breath every time they step into a taxi out of fear of being abducted. But if you pick your neighborhoods, take official taxis, and use your head, you’ll quickly discover that Lima is a unique city with a great deal to offer. Here’s just a sample of what we think makes this city of 8.5 million pretty great.

Some of the best food on the planet 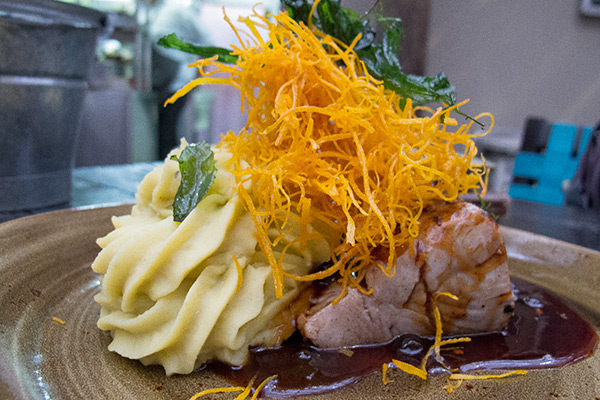 Honestly, before we came to Peru, we had no concept of Peruvian cuisine. So it came as quite a surprise when we flew into Lima and discovered what many consider the culinary capital of South America. Most of our Lima dining has been in Miraflores. From Peruvian celebrity chef Gastón Acurio’s La Mar to El Punto Azul, we’ve been stuffing ourselves with some of the best seafood on the planet. Lima is also a great place to sample the country’s celebrated national dish ceviche, which now counts as one of my favorite dishes in the world. We’ve also become real fans of the small but delicious lechón sandwiches at La Lucha. We could spend years eating our way through this city!!! 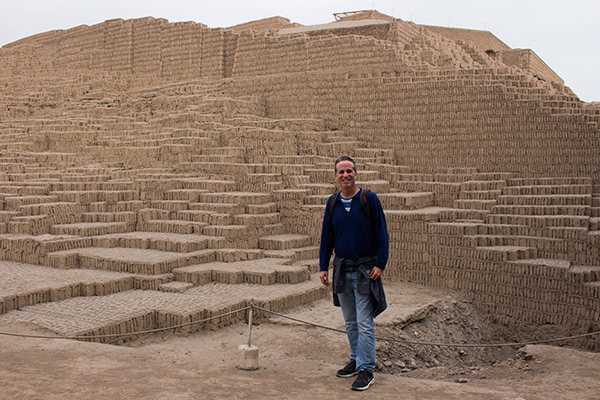 Most people don’t associate Peru with pyramids, but this country has LOADS of them – even in the middle of Lima’s urban sprawl. We explored three sites in and around the city to get a feel for this metropolis’ ancient past. Our favorite site, conveniently located in Miraflores, was spectacular Huaca Pucllana, a massive adobe pyramid and ceremonial center built by the Lima culture. There are great walking tours of the ruins which take visitors up onto the pyramid past a small, renovated tomb complete with mummy bundle and offerings. There’s also a nice little on-site museum with more mummies and artifacts. 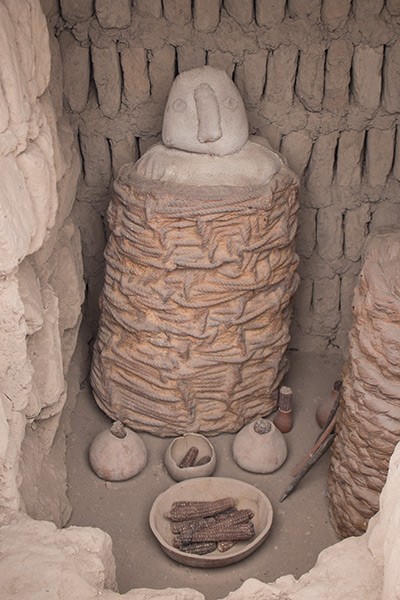 If that doesn’t satisfy your inner Indiana Jones, check out the highly restored Huaca Huallamarca in San Isidro. There is some debate as to how authentic the restoration is, but it does provide a great visual for what an uneroded pyramid would have looked like at the height of the Lima culture 1,500 years ago. It’s also kind of fun to walk up the ramp and stand on a pyramid surrounded by high-rise apartment buildings. 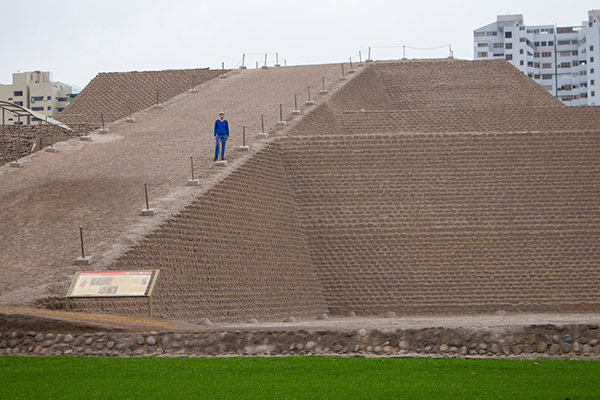 And since we can never get enough, we also explored the huge ruined city of Pachacamac, located about 30 km outside Lima. The site was begun by the Lima culture and later expanded by the Huaris and the Incas. The uber-restored Acllahuasi with its terrace of doors and the huge, blocky Temple of the Sun are the focal points of the site, but not much else has been restored. We enjoyed our visit, but we only recommend it to SERIOUS ruin/history buffs. It’s a lot of effort to get out here. 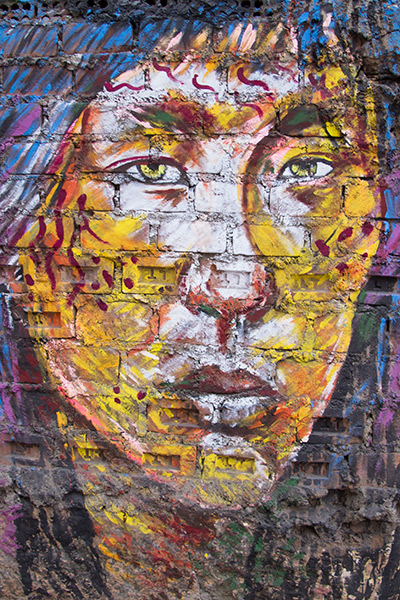 Lima is filled with fantastic street art. Everywhere we walked, we discovered colorful murals, some political, some comical, others pure works of fantasy. But be careful where you take out your camera. On more than one occasion, while we were attempting to photograph graffiti art around the city, locals ran up to us and told us to put our cameras away fearing we might get robbed. This city does have a serious edge… and it’s not just in the wall art.

A museum with more than a twist 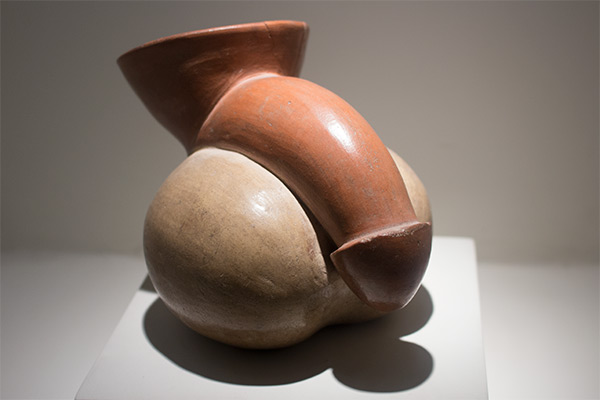 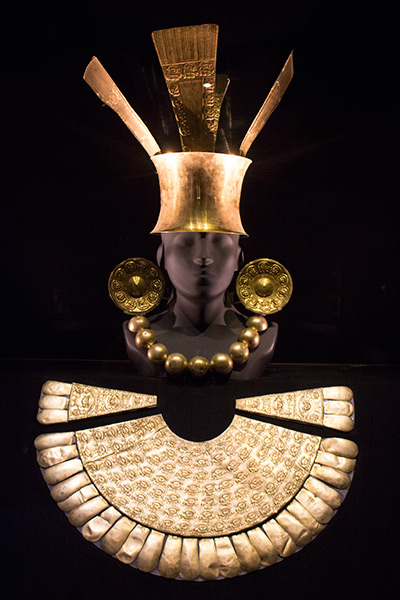 Housed in an 18th-century viceroyalty-era mansion and surrounded by incredible gardens, it was obvious to us that Museo Larco was different before we even set foot in the door. Inside, we discovered a world-class collection designed to give visitors a quick-course in Peru’s rich cultural and artistic heritage. Cupisnique, Vicus, Mochica, Chimu, Chavín, Tiahuanaco, Huari, Lima, Chancay, Paracas, Nazca Chincha… the Incas weren’t the only ones to inhabit Peru. Museo Larco’s permanent collection educates and illuminates, but it never overwhelms; every piece has been hand-selected to represent a time, a place, and an artistic tradition. 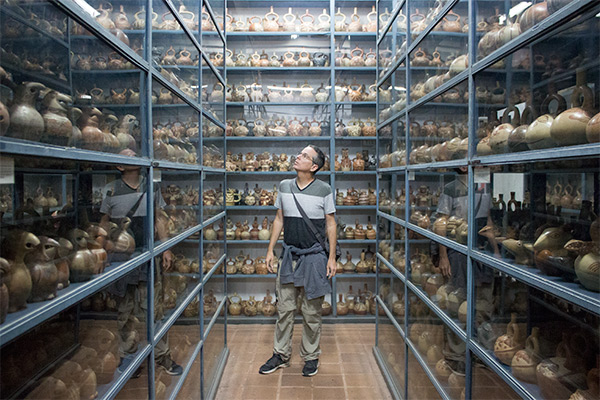 Although many articles and guidebooks focus on Museo Larco’s extensive pottery collection, the museum also boasts very impressive textiles as well as gold, silver and stone adornments. There are too many highlights to mention, but a few favorites include the spectacularly intact Paracas mantle, the collection of very large quipus, the gorgeous Huari mummy, and the collection of funerary garb including this Chimu headdress and collar shown two pictures above. The Museo Larco is also quite unique in that it has also made its storage areas accessible to the public. This genius innovation helps visitors truly grasp the enormity and richness of Peru’s ancient heritage. For art lovers, history buffs, and wannabe archaeologists, a visit to the Museo Larco is an absolute must. 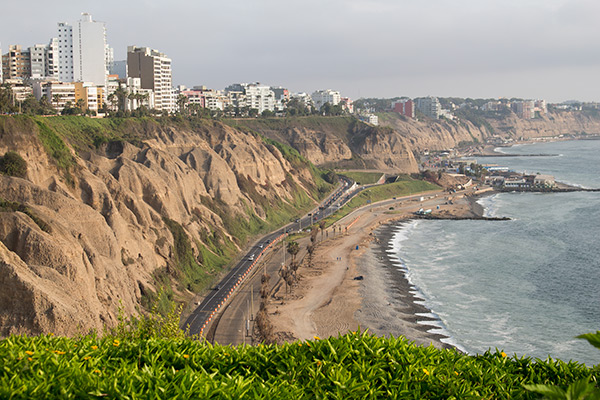 We had no idea until we got here that Lima sits atop a stretch of steep, crumbling cliffs, which look like they could go at any minute. Not surprisingly, the skyscrapers full of luxury condos that line the coast are mostly set back from the edge leaving a swath of unoccupied land running the length of those cliffs. 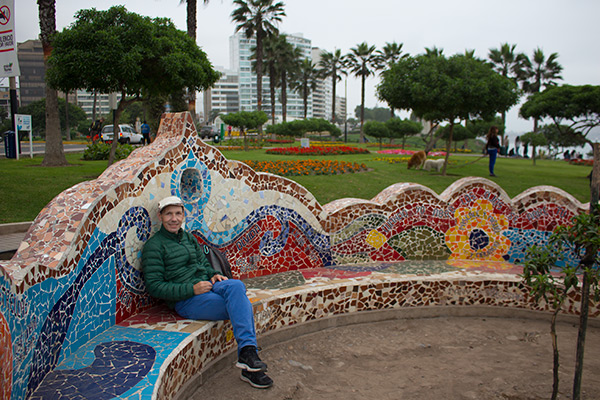 To prevent erosion and provide some much needed public space, the communities have built a series of beautiful cliffside parks that run for miles. We walked all the way from Park Itzhak Rabin to Barranco to take in one spectacular view after another. Don’t miss the beautiful Parque del Amor with its colorfully tiled walls and benches crowded with necking couples.

A mall built into those cliffs 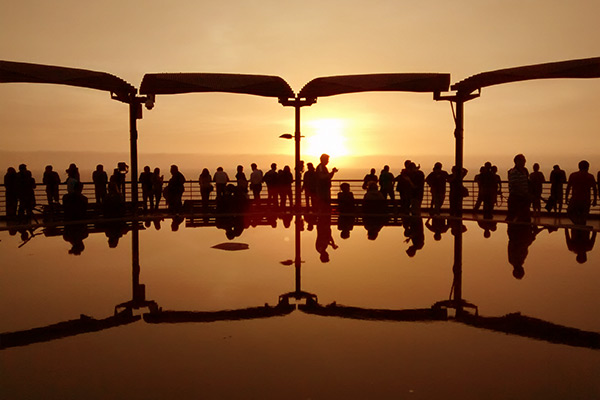 We weren’t joking when we said those cliffs were crumbling, but that didn’t stop some visionary (or should I say crazy?) developer from constructing LarcoMar, a luxury mall complete with movie theater and food court, into the the highest cliffs of Miraflores. The entire mall precariously clings to those sheer cliffs… at least until the next major El Niño.

Until then, it makes the perfect place to grab a bite (luxury or budget) overlooking the not-so-tropical incarnation of the South Pacific. Sunsets are free of charge. 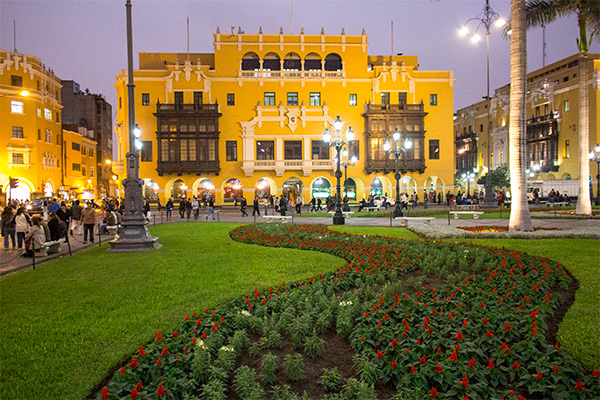 Perhaps we are starting to sound repetitive, but we didn’t have high architectural expectations for Lima, a city which is known for chaotic urban sprawl. So we were blown away when we arrived in the heart of the old city and discovered a truly beautiful UNESCO-recognized colonial core.

The Plaza de Armas is lined with stunning buildings from the baroque Catedral de Lima to the neo-colonial Archbishop’s Palace and the Governor’s Palace. Many of the buildings on the plaza and in the surrounding streets feature intricately carved Moorish inspired balconies. We spent a day strolling through the streets discovering the churches and colonial casas. There’s a lot to discover. 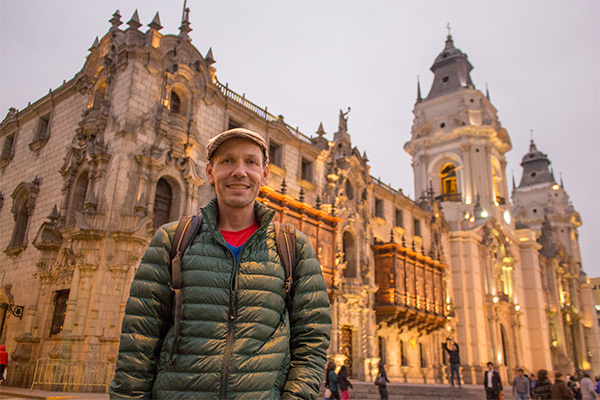 For us, a major highlight was the Franciscan Monasterio de San Francisco, consecrated in 1673. A mix of Spanish Baroque and Mudejar styles, guided tours lead visitors through the beautiful labyrinth of rooms pointing out special treasures including a stunning Moorish-influenced cupola over a grand staircase. Visitors also take in the macabre catacombs lined with the bones of thousands of Limeños. But those weren’t our favorite bones in Lima.

Bodies in the cathedral 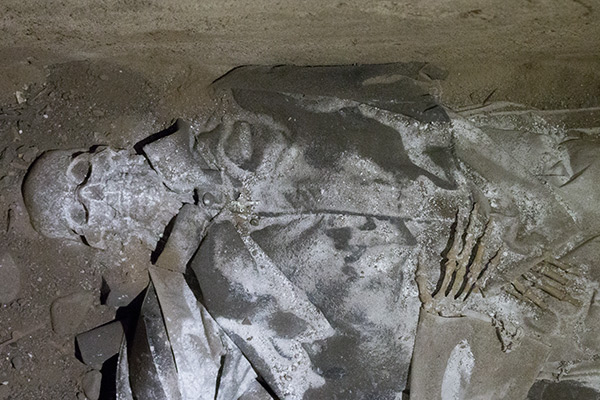 While most of the tourist focus is on the bones in the Monasterio de San Francisco, we were especially intrigued by the exposed tombs in the Catedral de Lima. The open graves reveal the withered remains of colonial-era couples, their period clothing still eerily intact. Some of the couples lie strangely head to toe, others had been positioned to look as though they were holding hands. Fascinating.

A lot of people skip the cathedral because those over-priced tickets on Peruvian churches add up, but we were glad we didn’t skip this one. 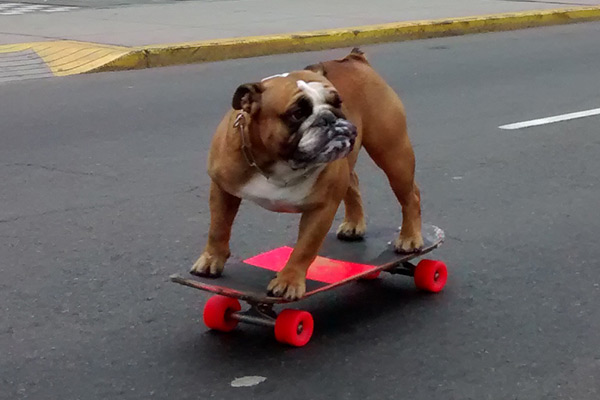 Miraflores shuts down traffic in the streets around Parque Central every Sunday morning so local residents can rollerblade, jog, bike, do aerobics… whatever one wants to do in the middle of an inner-city avenue. But just when you think you’ve seen it all, the amazing skateboarding dog zooms by on his board. This isn’t just some lame puppy that has been propped up by his master. The dog can push off on his own, speed up, go around corners, and weave in and out of joggers without hitting them. Very, very cool.

And make sure you hang around to watch his owner try to take the skateboard away. We watched the dog snatch the board out of his master’s hands and shoot down the street. This hound lives to skateboard!!! 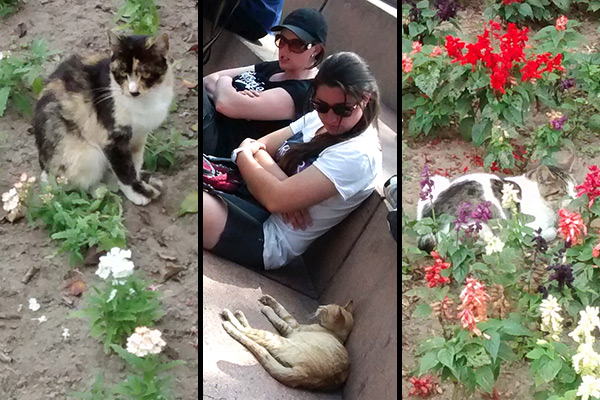 Miraflores has a weird and wonderful attraction for cat lovers as well. Parque Kennedy has become the defacto cat refuge of the city. Dozens upon dozens of cats roam the relatively small park, sun themselves, explore the flower beds, climb the trees and interact with park visitors. No matter where you look… cats, cats, cats. It appears that the stray cats are fed and maintained by the community because they all appear quite healthy and there were bowls of cat food everywhere. It’s an interesting setup. If anyone has more info on how this “cat park” got started, tell us about it in the comment section below. 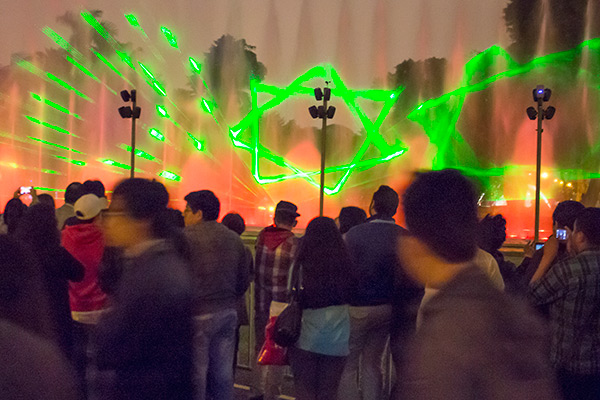 El Circuito Mágico del Agua is so kitschy, corny, and weirdly out of place in central Lima that it certainly qualifies as one of the most surprising surprises on the list. Located in the Parque de la Reserva, this local favorite is a series of fountains which spring to colorful and musical life after dark. There’s even an over-the-top laser show on a wall of water. Imagine ’80s green-line computer graphics meets swirling Quechua dancers with a dash of Beethoven and Queen and you get the picture. 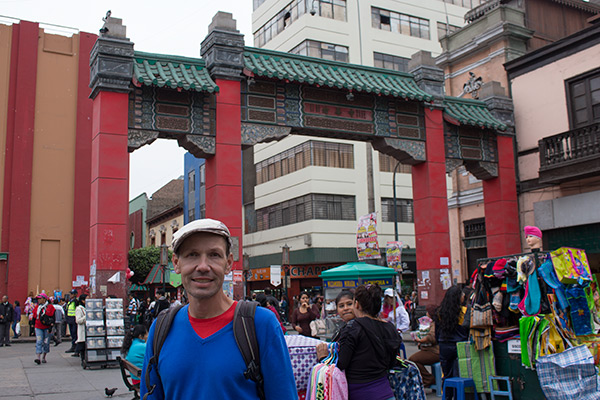 Who would expect a thriving Chinatown in the middle of Lima? The typical Chinese entry gate and streets full of bootlegged DVDs lend the neighborhood a certain authenticity. The food options seemed pretty impressive if somewhat pricey. But if you pay up, you can stuff yourself with dimsum or order up a whole Peking duck. We hit a local dive-restaurant with lunch specials and followed it up with a couple of egg tarts to go. Not bad. 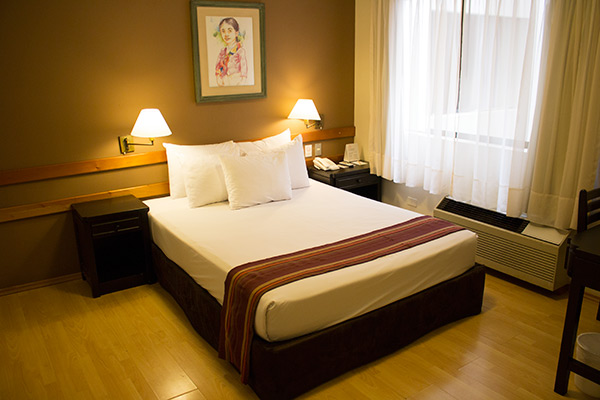 We would like to thank Casa Andina Classic Miraflores San Antonio for hosting us on our most recent visit to Lima. Not only was the comfortable hotel within walking distance of all the Miraflores attractions, but the hotel staff was exceptionally friendly and helpful during our stay.

Our computer crashed while we were there and lifesaver Katherine at the front desk helped us locate a place to have the computer repaired. What’s more, the hotel’s business center with computers and printers for guests saved our skins until the repairs were made. Whew!

We’d also like to thank Jesus, the waiter in the dining room. Every day when we came down for the breakfast buffet, his smiles and super professional service made our day. 🙂

Disclosure: While staying in Lima, we were guests of Casa Andina as well as Museo Larco. However, all of the opinions expressed here are our own.